A son’s promise: Panthers’ Foreman making most of 2nd chance

A son’s promise: Panthers’ Foreman making most of 2nd chance 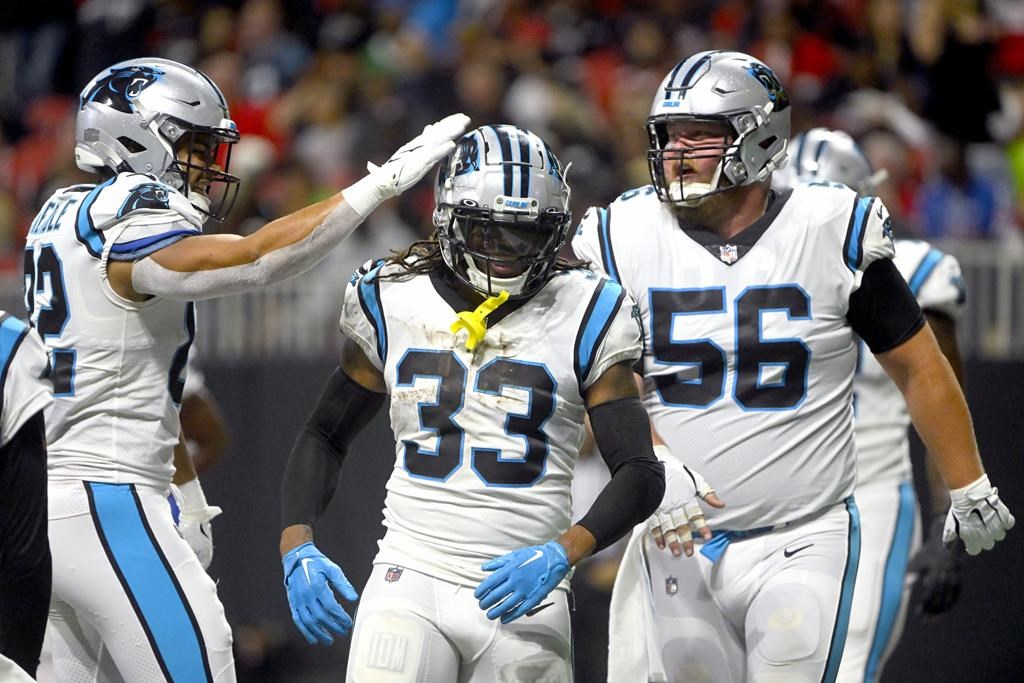 CHARLOTTE, N.C. (AP) — Carolina Panthers running back D’Onta Foreman recalls the promise he made to his father just days before he was killed 13 months ago.

“I told him, if I ever got another opportunity,” Foreman said, “that I was going to take it and try to make the best of it.”

He’s living up to that.

The 26-year-old Foreman has emerged as a major threat in the Panthers’ rejuvenated running game, rushing for 236 yards in the two games since star running back Christian McCaffrey was dealt to the San Francisco 49ers. He ran for three touchdowns in last week’s 37-34 overtime loss to the Atlanta Falcons and is averaging 5.2 yards per carry entering Sunday’s game against the Cincinnati Bengals.

Foreman considers every day he plays in the NFL a blessing because he knows all too well what it’s like being on the outside looking in.

His professional career began in storybook fashion when the Texas City, Texas, native was drafted in third round by the hometown Houston Texans after an impressive junior season at at the University of Texas, where he ran for 2,028 yards and 15 TDs for the Longhorns.

But an Achilles injury near the end of his rookie season cost him nearly all of the following season and led to his release. He signed with the Indianapolis Colts in 2019, but he tore his biceps and sat out the entire season.

He signed with the Tennessee Titans in 2020, but was limited to 95 yards on 22 carries and he wasn’t retained after the season.

Then came the move that hit hardest, getting cut in training camp by the Atlanta Falcons in the summer of 2021.

“I was at that point where I was like, it actually might be over this time,’” Foreman said.

He began thinking about life after football, investing in his trucking company — Foreman Transport, a fleet that includes two 18-wheelers — and purchased some land as part of a real estate investment.

Then in October 2021, his world was shaken when his 47-year-old father Darreck Foreman was killed in a one-vehicle crash after losing control of his 2014 Freightliner, causing it to roll over before coming to rest on its side. He was pronounced dead at the scene.

Less than a month later, a grieving Foreman was gifted with an unlikely second chance at his NFL dream — and he vowed to make good on the promise he’d made to his father.

The Titans, who had liked what they seen from Foreman in his limited playing time in 2020, asked him to re-sign and help fill a void left by an injury to superstar Derrick Henry. Foreman joined a backfield that included Adrian Peterson, but he quickly emerged as Tennessee’s primary running back, rushing for 566 yards on 133 carries with three TDs on the ground, helping the Titans reach the AFC playoffs.

It breathed new life into his career — and his confidence skyrocketed.

Foreman signed with Carolina as an unrestricted free agent earlier this offseason. He only got 12 carries through the first five games, but another door opened when the team traded McCaffrey.

Foreman came off the bench to run for 118 yards on 17 carries in a 21-3 upset win over Tampa Bay, then got his first start last week and carried 26 times for another 118 yards along with TD runs of 2, 1 and 12 yards. He also scored on a 2-point conversion.

“I sit back and think about the times when I was at home, and think about what went wrong and if I ever had a second chance what I would do differently,” Foreman said. “Well, the time is here.”

Panthers quarterback P.J. Walker called Foreman a “tank” on the field, a player that defenders don’t necessarily want to tackle, particularly late in games when they get tired.

“He’s a bruiser and he’s tough to tackle,” Walker said of the 6-foot-1, 220-pound Foreman. “His production the past couple of weeks has been phenomenal. Just keep feeding him the ball.”

Foreman fits perfectly into the identity that interim coach Steve Wilks has tried to create the past three weeks — a bruising, physical back who can wear down a defense.

“He creates problems as the game goes on,” Wilks said. “Having to tackle somebody like that, particularly when he can get to the second and third level, those DBs don’t want to make that contact and tackle big backs like that.”

Foreman, who signed a one-year $2 million contract with the Panthers, doesn’t know exactly what his future holds.

But he plans to make the most of it.

“I just want to be able to capitalize and be a great teammate and just try to find a way to win games,” Foreman said.