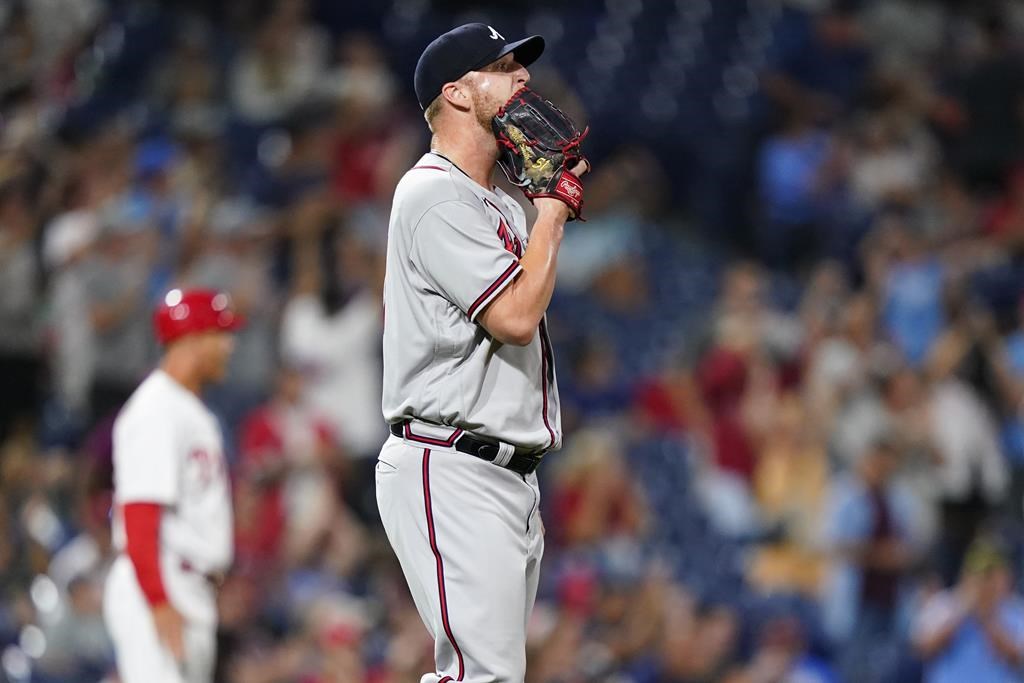 ATLANTA (AP) — The World Series champion Atlanta Braves bolstered their starting staff ahead of the trade deadline Tuesday by giving up a reliever who played a big part in their 2021 title.

Poised for another postseason run, the Braves dealt former closer Will Smith to the Houston Astros for right-hander Jake Odorizzi, giving Atlanta a sixth starting pitcher for the final two months of the regular season.

The move was the biggest of three deadline deals pulled off by general manager Alex Anthopoulos, who on Monday gave up minor leaguers for corner outfielder Robbie Grossman from Detroit and infielder Ehire Adrianza from Washington.

Atlanta, with the third-best record in the NL and going into Tuesday’s games trailing the East-leading New York Mets by 3 1/2 games, was seeking additional depth for the rotation.

Ian Anderson has struggled and former All-Star Mike Soroka appears unlikely to make a major contribution this season after two major Achilles’ injuries. Also, there are concerns that 13-game winner Kyle Wright, in his first full big league season, and rookie sensation Spencer Strider could tire down the stretch.

Smith played a huge role in the Braves’ first World Series championship since 1995. He had 37 saves during the 2021 regular season and was even more dominant in the postseason, throwing 11 scoreless innings with six saves over 11 appearances.

But Smith willingly gave up the ninth-inning slot when the Braves signed longtime Dodgers closer Kenley Jansen during the offseason, and the lefty faltered in a less-prominent role.

In his last four appearances with the Braves, Smith surrendered six runs in three innings.

He was especially expendable with three other lefties — A.J. Minter, Tyler Matzek and Dylan Lee — proving more effective out of the bullpen. Also, former Padres closer Kirby Yates appears close to returning to the big leagues with the Braves after recovering from Tommy John surgery.

The AL West-leading Astros acquired the pitcher who was on the mound for the decisive game of the Braves’ World Series victory over Houston last season.

The Astros have a glut of starting pitching and could afford to give up Odorizzi, especially to acquire a much-needed lefty for their bullpen. Smith is making $13 million in what is likely the final year of his contract. He has a $13 million club option for 2023 with a $1 million buyout.

Odorizzi missed 42 games with a lower left leg injury and is 1-1 with a 4.45 ERA in five stars since returning to the Houston rotation. In his latest outing, he surrendered two hits in seven scoreless innings against Seattle.

The Braves could use six starters on an upcoming three-city road trip that includes a pair of doubleheaders. After that, they could go with Odorizzi as a spot starter to give everyone additional rest ahead of the postseason, or make a change if someone falters.

The 24-year-old Anderson has been a big disappointment, going 9-6 with a 4.99 ERA, though he did bolster his chances of staying in the rotation by giving up only one hit over six scoreless innings against the Nationals in his last start.

Wright has blossomed this season, leading the NL in wins to go along with a 2.93 ERA. But he has thrown 122 2/3 innings, closing in on his professional high of 143 1/3 set last season while mostly pitching at Triple-A Gwinnett.

The hard-throwing Strider has made a hugely successful transition to the Braves rotation, going 5-3 with a 2.93 ERA in 22 appearances that include 11 starts.

But Strider has logged 80 1/3 innings, not far from the 96 1/3 he pitched a year ago while making a meteoric rise from Low-A to the big leagues in his first professional season.

The trade for Odorizzi, who has a $6.5 million player option for 2023 and minimum buyout of $3.25 million that could grow based on innings pitcher over 2021-22, would seemingly complete the Braves’ wish list before the deadline.

Grossman, a switch hitter who has been much more effective against left-handers, gives the Braves an outfielder who can platoon with lefty-hitting Eddie Rosario and serve as a replacement for Adam Duvall, who recently underwent season-ending wrist surgery.

Adrianza returns to the team he played for in 2021, providing additional infield depth until Ozzie Albies returns from a broken foot, likely in early September.

The Astros also were busy at the deadline, acquiring catcher Christian Vázquez from Boston and slugger Trey Mancini from the Orioles.