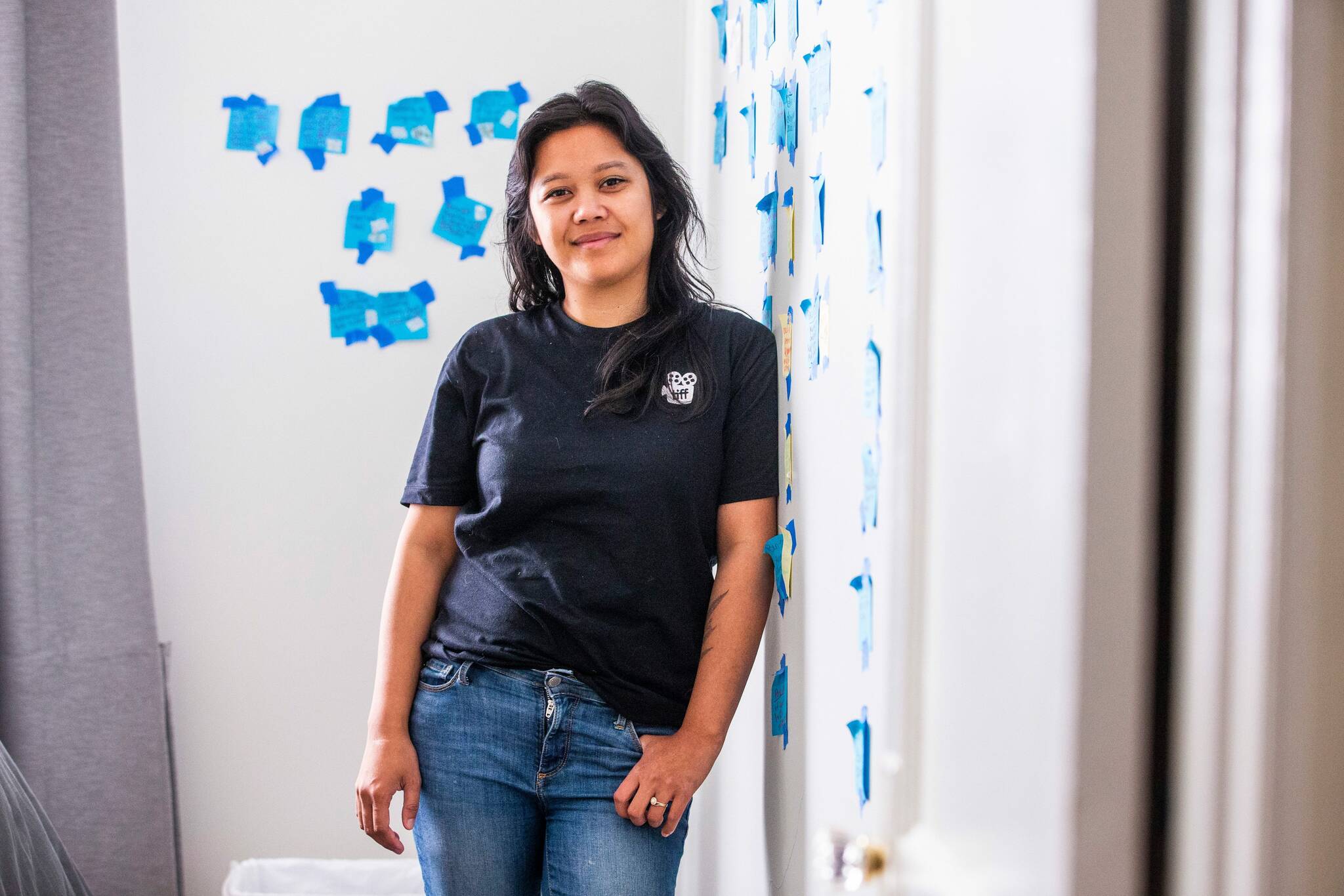 As a child, MC de Natividad was fluent in her mother tongue. When she emigrated from the Philippines to Canada with her family in 1991, the four-year-old communicated solely in her native dialect of Tagalog.

Her grasp on the language soon faded. Thirty years after she arrived in Winnipeg, de Natividad found herself struggling to speak the words that had once so smoothly rolled off her tongue.

English had taken root in her mouth, erasing all traces of Filipino.

“I came here speaking fluent Tagalog. Filipino, which stems from Tagalog is, the national language of the Philippines and my parents, I don’t think it was intentional, but my parents wanted me to learn English really well,” she says. “They encouraged us (their children) to speak English. They didn’t encourage us to speak Tagalog back to them.”

Her parents, father Orlando and mother Priscilla, had left the Philippines to ensure a better life for themselves and their three children. For them, like for most immigrants, the desire to “fit in” was strong and language was one of the things lost in the process of becoming more Canadian.

De Natividad cannot remember much of her Southeast Asian childhood. Her first memory is of leaving the country of her birth. Distraught at having to say goodbye to her grandfather, she slipped through the gates to stay with him, only running back when her mother pretended to leave without her.

Today de Natividad finds herself straddling two worlds. Her home is here in Winnipeg, where she’s lived for most of her life, but she still considers the Philippines her home, too. Before the pandemic, she would go back every other year; the last time she visited was in 2017.

Every time she returned she realized she was losing her ability to converse smoothly in her mother tongue.

“I think because it happened so gradually, it was not something I really thought about at first,” she says. “It did make me feel incredibly uncomfortable, however, to not be able to speak Filipino when I was around other Filipinos, especially when I was in the Philippines. It made me feel embarrassed.”

In September 2021, decades after she had stopped speaking it, de Natividad decided to relearn the language. She admits it was difficult; her biggest hurdle was getting to grips with it mentally.

“Having to think about what I’m about to say before I say it… Filipino’s sentence structure is opposite to English, so it’s a new way to think. It’s still not entirely comfortable for me to speak Filipino, and I still speak mostly English to my family. I hope that changes one day,” she says.

De Natividad’s journey to relearning Filipino is the premise of her debut film, Bumalik, which means “to go back.” Shot in location in Manitoba, the 32-minute documentary is a paean to the people who uphold Filipino culture, and specifically the language, here.

It is also de Natividad’s love letter to her late aunt Myrna Navarro Bumanglag, who passed away last year.

“She was a big part of me making the documentary,” de Natividad says. “We were extremely close. She was the person who sponsored us to get here; I wouldn’t have been in Canada without her. She told me ‘Don’t forget your language’ and it think it was the motivator for me.”

Bumanglag was one of her biggest cheerleaders, supporting de Natividad’s choice of career, making her believe she could do anything.

“The last conversation we had before she passed, I was telling her I was reclaiming my language, and she was very happy.”

De Natividad had to fit in filming around her full-time job, sometimes working 16-hour days on the weekend in order for the film’s release to coincide with the one-year anniversary of her auntie’s demise.

“In a lot of ways making this film was a grieving process. She was like a second mom to me. There is a whole segment about her, what she did for me and my family. I wanted it to be a celebration of her life,” she says.

Another person de Natividad credits is mentor Erin Hembrador, who guided her throughout the filmmaking process. Hembrador, who died on Oct. 28 the age of 33, was also a Filipina director from Winnipeg. The two had not met before de Natividad started working on Bumalik.

“I wanted to work with a Filipino director,” she says. “I chose her because her stories resonated with me. She did a lot of things related to the immigrant experience.

“I came into film not knowing anything and she walked me through the process. She exemplified what a mentor was. She gave me so many resources. I can’t even put into words the time and generosity she gave to me with her knowledge. I am trying to wrap my head around how to honour her. I couldn’t have done this film without her.”

Bumalik features prominent Filipino Winnipeggers such as Manitoba MLA Malaya Marcelino and community leader Perla Javate, as well as interviews with the educators from the Manitoba Association of Filipino Teachers Inc (MAFTI), a non-profit organization which offers free language courses online. De Natividad also included her husband Rob, who supported her by learning Filipino with her, in the film.

The film was made possible through a $10,000 BIPOC Artist’s Film Fund grant awarded by the Winnipeg Film Group and IATSE Local 856. Along with the cash, the inaugural fund offers equipment rentals, training and memberships to a novice BIPOC (Black, Indigenous, person of colour) filmmaker.

“I did it naively,” she says. “If I had known how much of a big deal it was, I wouldn’t have gone for it. I got this opportunity through them.”

De Natividad made sure she selected her crew from the BIPOC community, saying she is “very proud” she was able to do that.

“I know just from conversations I’ve had with other BIPOC folks that we are very underrepresented, especially in key positions. Everyone I hired is amazing. I would hire them again and I would recommend them to everyone.”

“The reason why I feel I am the person to tell this story is that I have two very distinct identities: Filipino and Canadian,” she says. “Most people I know from the Filipino community, they either came here as adults or they were born here… not too many people came here during their formative years.

“I feel in-between places. I used to hate it but now I see it as an ability to see both worlds.”


If you value coverage of Manitoba’s arts scene, help us do more.
Your contribution of $10, $25 or more will allow the Free Press to deepen our reporting on theatre, dance, music and galleries while also ensuring the broadest possible audience can access our arts journalism.