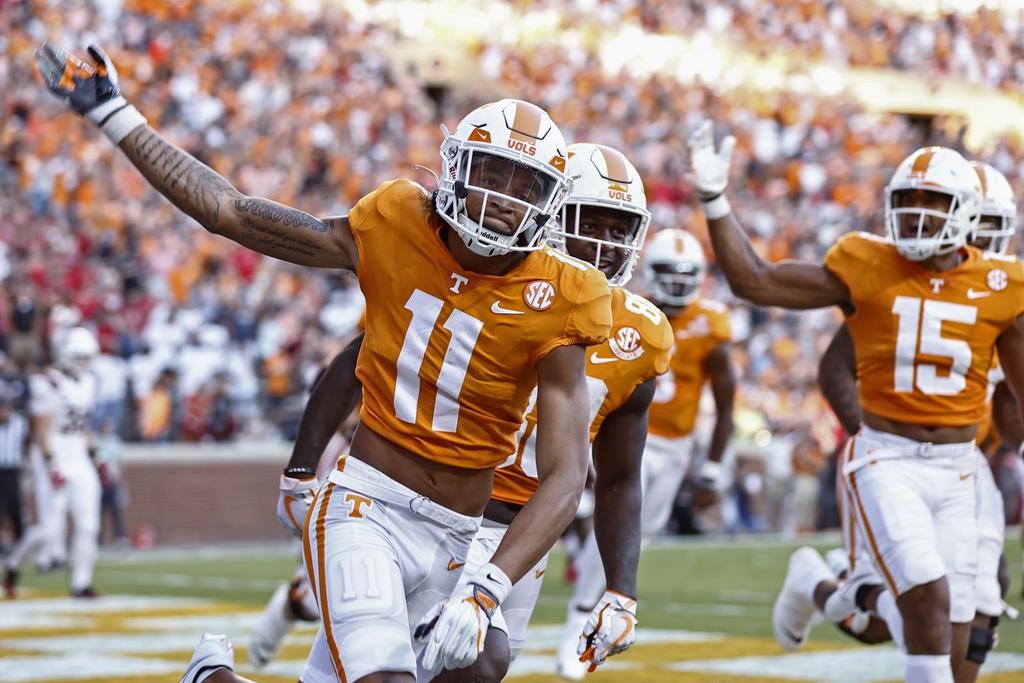 Hooker, in his second year as the Volunteers’ starter after transferring from Virginia Tech, had 211 yards passing by halftime along with a 38-0 lead. Eight different receiver caught passes in the first 30 minutes. He was replaced by Joe Milton midway through the third quarter.

Jaylen Wright led the Tennessee ground game with 86 yards and a touchdown.

The Cardinals’ bruising running back Carson Steele was limited to 27 yards on 11 carries.

Making his first career start at quarterback for Ball State, redshirt junior John Paddock threw for 269 yards and a TD.

The Vol defense came up with three turnovers — two interceptions and a fumble.

Hooker extended his streak of games with having thrown a touchdown pass to 13, tied with Tony Robinson (1984-85) for second all-time in Vols’ history behind Heath Shuler’s 18 (1992-94)… Hooker’s two TD passes gave him 33 in his two-year career at Tennessee, 10th on the all-time list… Vols receiver Cedric Tillman had his streak of seven consecutive games with a touchdown reception come to an end. Tillman is Tennessee’s all-time leader… Tennessee has scored 45 or more points in its last four games, tying a school record set in the last four games of the 1993 season.

Ball State: The best thing to come out of Thursday night’s game in renovated Neyland Stadium was the $1.5 million game check that will help the athletic department. The Cardinals, picked to finish last in the Mid-American Conference West Division can set their sights on improvement after the lopsided loss.

Tennessee: With the embarrassing 2019 season-opening loss to heavy underdog Georgia State still fresh in the minds of Volunteer fans, they were able to exhale when Tennessee, under second-year head coach Josh Heupel, showed it was focused and prepared. The Vols made positive strides that they will be able to take into next week’s trip to play No. 17 Pittsburgh.

Ball State: The Cardinals will jump into the MAC season next Saturday when they entertain rival Western Michigan.

Tennessee: The Vols will head to Pitt Sept. 10 with revenge on their minds. Last year, Tennessee gave up 27 points in the second quarter and lost a 41-34 decision to the Panthers.

Sign up for the AP’s college football newsletter: https://apnews.com/cfbtop25