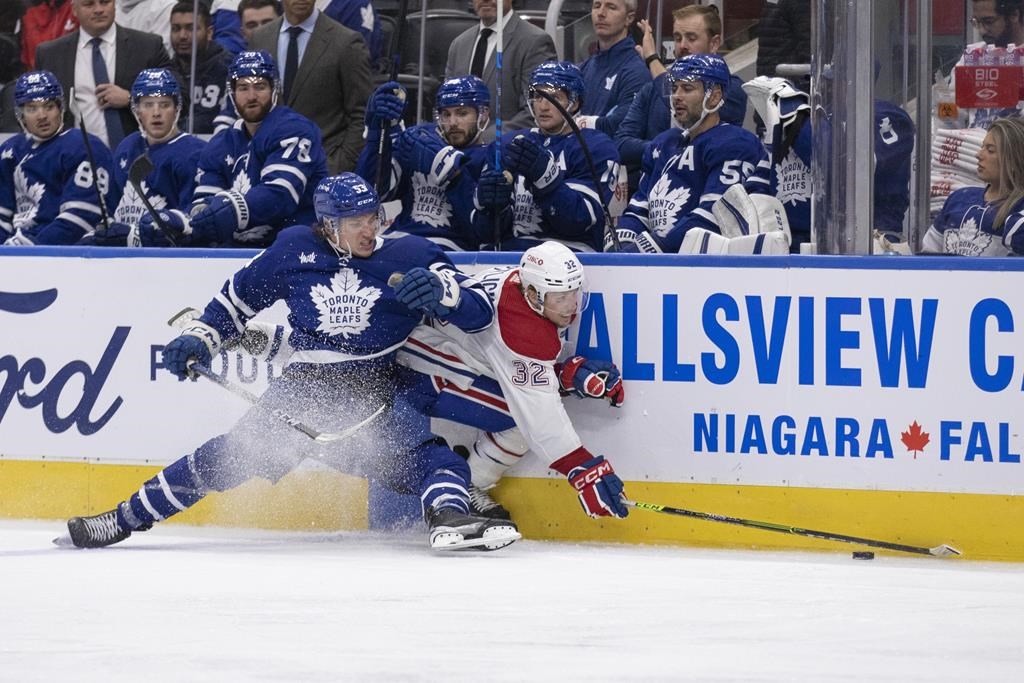 The NHL’s digitally enhanced dasherboards are here to stay. And additions are coming to a system that currently showcases advertisements.

The league launched the new look on NHL game broadcasts this season. Traditional in-venue ads remain on the boards but there is now digital replacement signage for viewers watching on screens.

“What we are seeing now is the beginning of a system that will look very different over time,” NHL chief business officer Keith Wachtel said Wednesday.

The league partnered with London-based Supponor to develop the AI-based technology to program the graphics. Ads and brands that are seen exclusively on the boards right now will eventually have company in the form of “production enhancements.”

For example, when a team scores, viewers may see the player name and picture of the goal scorer. If a club goes on the power play, a logo could flash on the boards.

The speed of a slapshot could also be featured, among other things. Broadcasters will also be able to use the boards to promote events and upcoming programming.

“It’s just the beginning,” Wachtel told The Canadian Press from New York. “There are things that we’re going to be able to do that we haven’t even thought of yet.

“It’s kind of like the theatre of the mind.”

There is no firm timeline in place for the additions just yet. Wachtel said the league may try to incorporate some elements for various “event-driven games” this season and there may be opportunities in the post-season.

Advertisements on NHL rink boards were introduced in 1981. The Minnesota North Stars sold the first pair of dashers for US$3,000, Wachtel said.

The digitally enhanced dasherboards (DEDs) provide a significant change to a business model that has been in place for over four decades.

It now includes regional, national and international advertising options depending on where the game is being broadcast. The new system also gives teams the opportunity to provide their corporate partners and advertisers with exposure in home and away broadcasts for the first time, the league said.

“It’s now a new asset that is part of a suite of assets that a club or the league can sell,” Wachtel said. “It’s just new, more dynamic and we think more valuable to a marketer.”

However, the rollout has endured some early criticism. The graphics can appear glitchy on occasion and images can look distorted at times.

“My initial thoughts are that it’s been going well,” said Mike Naraine, a sport management assistant professor at Brock University. “I would have liked to have seen a little bit less on the bug side of things.

“But again, with the introduction of a new technology to the system, there’s always going to be bugs.”

There have also been occasions where players are battling for the puck in the corner and the digital imagery bleeds into the uniforms.

“The glitches are smaller and smaller when they’re happening right now,” Wachtel said. “We’re pleased with where we are (in general) but by no means do we feel like we are done making improvements.”

Soccer, football, auto racing and other sports have used similar technology. For hockey, the DEDs provide a way for the league to “build a true international business and engage more marketers,” Wachtel said.

“So it’s not just about the advertising, it’s about our ability now to bring in marketers that will help promote and support the engagement of the sport.”

Cheri Bradish, the chair of marketing management at Toronto Metropolitan University, said it’s part of sport viewers seeing innovations in terms of “pushing the dial” from a revenue perspective.

“The whole digitalization of sport definitely has progressed through COVID in many ways,” she said from Toronto. “I think people are just very accustomed to the sport properties and teams trying to be creative in their advertising and communication.”

Naraine said DEDs can provide a revenue stream “unlike any other” in terms of providing tailored content to the market.

“Some fans might think it’s distracting but they’re doing exactly what they’re supposed to do, which is people are taking notice of the ads,” he said from St. Catharines, Ont.

“It’s actually providing the (return on investment) for the advertisers, which is the name of the game,” he added.