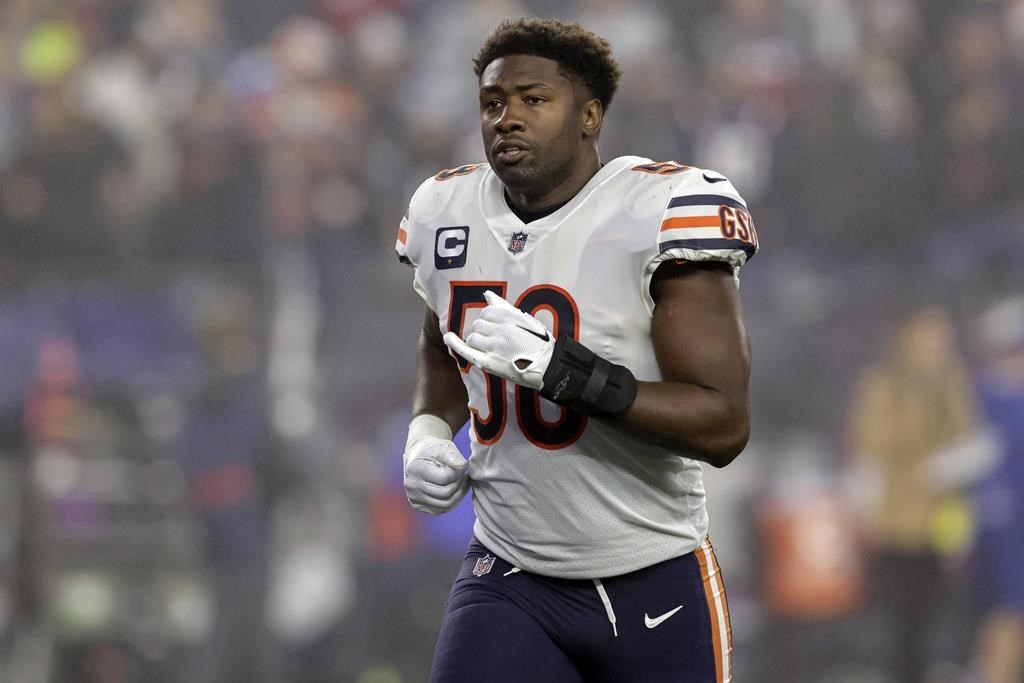 OWINGS MILLS, Md. (AP) — The wide smile on Roquan Smith’s face made it clear how he felt about his new surroundings.

Smith was upbeat Wednesday when speaking with Baltimore-area media for the first time since he was traded from the Chicago Bears to the Ravens this week.

Although changing teams is often jarring, this is an opportunity for the standout linebacker to contribute to a contender.

“I’m excited, and I know they’re trying to get over the hump and win the big game,” Smith said. “I feel like I can be one of the guys that can help with that, so I’m excited to be able to give everything I have to make that happen.”

Smith appeared in only one postseason game in his first four seasons with the Bears, and now he moves from a sub-.500 team to a division leader. The Ravens are adding him to a defense that took its lumps early in the season, but now has 15 sacks in the past four games.

It’s also a team that has forced at least one turnover in every game this season.

“You’re putting all your chips in the middle of the table,” said defensive end Brent Urban, who played with Smith in Chicago in 2019 and 2020. “It’s exciting, man. It means that they believe in the roster, and adding a guy like that means we’re ready to kind of win now. We all held that belief in the locker room already, and this only just solidifies that.”

Smith, the NFL’s leading tackler at the moment, feels he can get up to speed in time for Monday night’s game at New Orleans. The Ravens have an open date after that.

“I don’t feel like it’s an all-out cram session, because I feel like I have a nice understanding of everything that we’re doing here on defense,” he said. “That’s part of being a pro, and those guys in the locker room are getting me right, as well as the coaching staff helping me out big time. So, I feel very comfortable with where I’m at right now, and by Monday, I know I’m going to feel even better.”

The rest of Baltimore’s defense seems excited to welcome him. That includes Patrick Queen, another inside linebacker.

“I was just shocked and ecstatic at the same time,” Queen said. “Most people thought I would take it the wrong way, when honestly, if you’ve got somebody that quick playing on the other side of you (that) you get to learn from and see the things that he does, you just get a piece of his game. So, I was ecstatic about it.”

Smith’s past few months in Chicago were a bit turbulent. His rookie contract expires after this season, and that led to a standoff with the Bears that was acrimonious at times. Chicago also traded defensive end Robert Quinn to Philadelphia recently, a move that left Smith publicly shaken.

Smith doesn’t have an agent — a similar arrangement to the way star quarterback Lamar Jackson handles his negotiations with the Ravens. Jackson is in the same situation, with an expiring contract and no long-term deal with the team yet.

“Everything has happened really, really quickly, so I’m just trying to focus on honing in on this playbook right now, and getting to that once I get to it,” he said. “My main focus right now is learning the playbook, getting a great relationship with the guys and then going from there.”