Packers realize task at hand after lack of trade activity

Packers realize task at hand after lack of trade activity 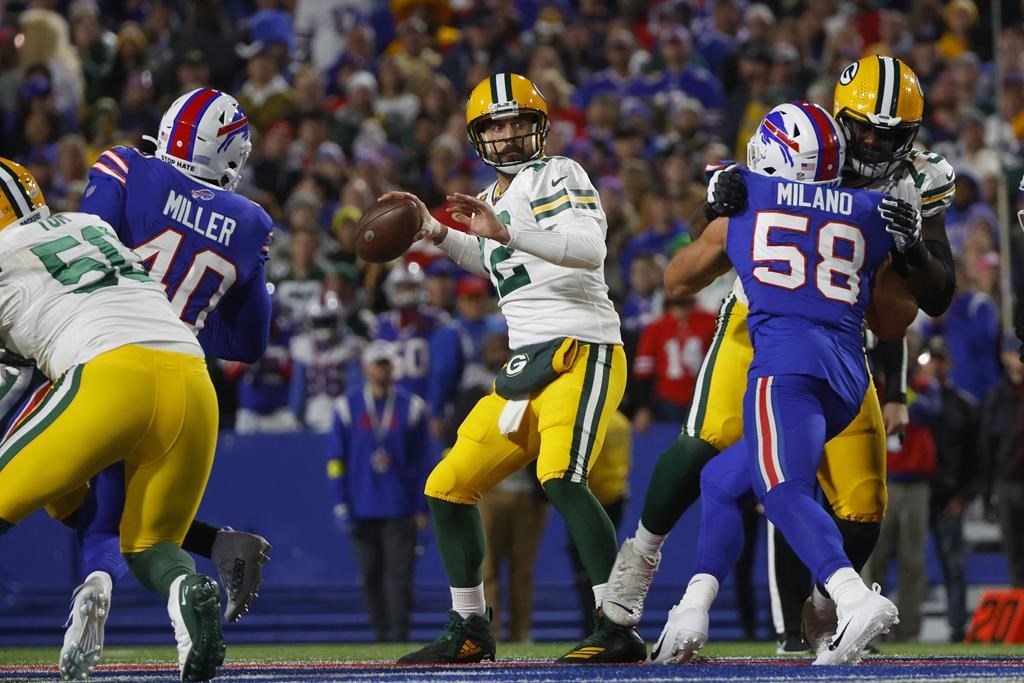 GREEN BAY, Wis. (AP) — Aaron Rodgers says the Green Bay Packers are optimistic they can turn their season around and earn a fourth straight playoff berth even though they didn’t make any additions at the trade deadline.

“I do feel like we need to get healthy.”

The Packers historically haven’t made many moves at the trade deadline, opting instead to build through the draft. It seemed this year might be an exception since the Packers (3-5) have dropped below .500 and are in win-now mode with Rodgers a month from his 39th birthday.

Green Bay instead stood pat while a couple of other NFC North teams added playmakers, with the division-leading Minnesota Vikings acquiring tight end T.J. Hockenson from the Detroit Lions and the Chicago Bears getting wide receiver Chase Claypool from the Pittsburgh Steelers.

“Obviously the compensation for whatever players we were going after, it just didn’t make sense,” Rodgers said. “So I trust (general manager) Brian (Gutekunst). We had some good conversations, and I know we were in on some things, and it obviously just didn’t pan out.”

Packers coach Matt LaFleur said Green Bay’s players and coaches are too focused on their upcoming game at Detroit (1-6) to worry about personnel moves that were or weren’t made. Wide receiver Sammy Watkins said he believes the Packers already have enough talent to win.

“I think when you look at this team, you pretty much have everything you need,” Watkins said. “Would (a trade) have brought some more life? I mean, who says it would have or wouldn’t? I think this team has the players they need. If they didn’t, I’m sure the GM would have gone out there and traded for someone.”

The Packers have dropped four straight and are trying to avoid their first five-game losing streak since 2008. Green Bay ranks 26th of 32 NFL teams in points per game (18.1) and has been hindered by injuries to its receiving corps.

Randall Cobb is on injured reserve and will miss a third straight game Sunday. Rookie second-round pick Christian Watson suffered a concussion early in the Packers’ 27-17 loss at Buffalo and didn’t practice Wednesday.

“We haven’t kind of had the 11 we thought like we were going to play with for an extended time,” Rodgers said. “When we get those guys, I feel like we have the team to get the job done.”

Green Bay did get some good news Wednesday when Rodgers practiced on a limited basis. Rodgers had sat out the Packers’ Wednesday practice each of the last three weeks to rehabilitate his injured right thumb.

“I heard it was going to be just a jog-through so I figured I might as well get down there and be around,” Rodgers said. “I wish I could tell you it was feeling better, but it was more just the necessity of the jog-through and feeling like my presence down there was kind of more important today than an hour of rehab.”

The Packers have rebounded from this type of slide before.

This is the first time Green Bay has lost four straight since 2016. That slump dropped Green Bay’s record to 4-6, and Rodgers responded by predicting the Packers would “run the table.”

Sure enough, the Packers won their next eight games before losing at Atlanta in the NFC championship game. Rodgers threw 21 touchdown passes with only one interception during that winning streak.

“That’s what needs to happen with these guys. When we start expecting to win and not hoping to win, things can change a little bit.”