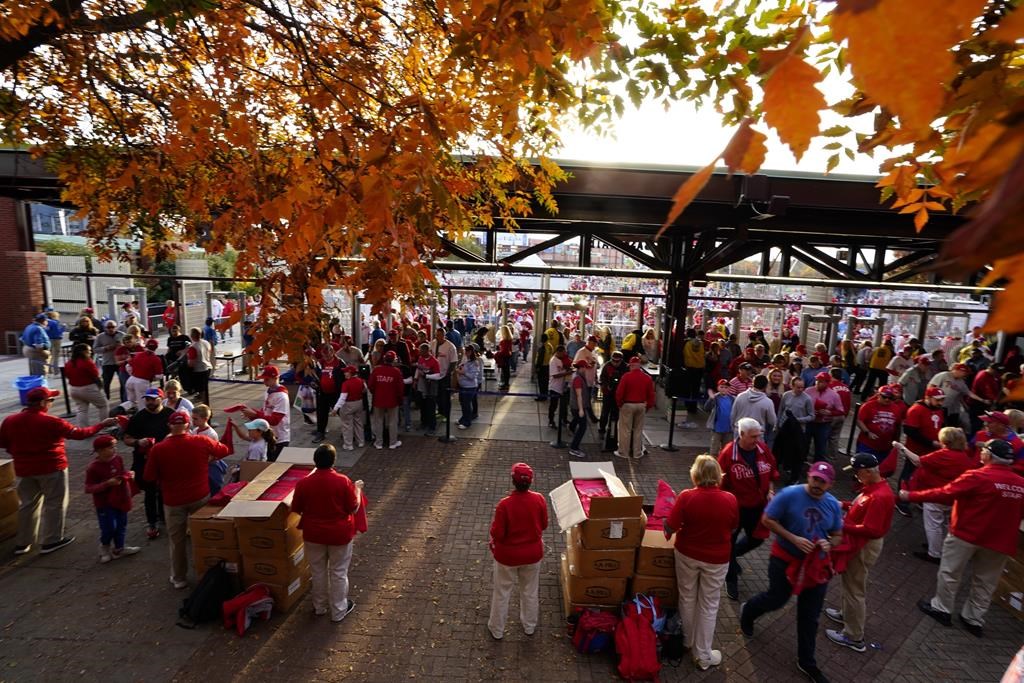 PHILADELPHIA (AP) — The road trip of the NFL season was mapped out months ago for Eagles fan Kevin Ridpath. There was a flicker of hope the season-ticket holder could catch the Birds in Arizona until a wedding got in the way. Chicago? Nah, much too cold in December.

So it was settled: Ridpath, his dad and a buddy would hop a flight to Texas and watch the Eagles play a Thursday night game against the Houston Texans.

Better yet, the undefeated Philadelphia Eagles.

How in the name of Buddy Ryan could any Eagles fan possibly have a reason for feeling irked over buying a ticket behind enemy lines and catching an Eagles game in prime time!?

See, Harper and the rest of the Philadelphia Phillies took off on their improbable postseason run that now pits them against, of all teams, the Houston Astros in Game 5 of the World Series in Philly. Thanks to a Game 3 rainout, both Eagles-Texans and Astros-Phillies play on the same night and the same time, causing some headaches — though it’s more sports heaven in Philly — for fans who would rather not divide their fandom.

That includes Ridpath, who says he already spent a grand on his trip to Houston.

“I’m hoping maybe the Birds get out to a big lead and maybe we’ll go find a bar in the stadium to watch the Phillies,” Ridpath said. “I can’t imagine they’re not going to have a baseball game on in the stadium somewhere.”

The Texans know their audience is thirsty for baseball and plan to rotate the Astros score on the side panels of the video boards throughout the game. More than 50% of the televisions around the stadium that would normally show other NFL games will instead show Game 5.

Normally, the team features an NFL scoreboard during the games, but on Thursday, the Texans will drop in on the big screen to provide the World Series score and big-play updates.

Drew Dougherty, the host of Texans TV, will provide these updates.

Dougherty knows a lot of fans will be splitting their attention Thursday night and is happy to help them follow along with the baseball game.

“I’m looking forward to hopefully calling out some happy highlights for the Astros on Thursday night that will mingle with some good highlights that we’re putting up against the Eagles,” he said.

Eagles fans, like Ridpath, have a stout reputation of flocking in strong numbers to road games to try and replicate the feel of Lincoln Financial Field.

Vince Rizzuto founded Philly Sports Trips in 2017 and offers premium travel and tailgating experiences for Philly fans. The travel packages are quick sellouts and a group of 50 fans are scheduled to head to Houston. Rizzuto also sold 200 tailgate packages for Thursday’s football game.

“People are so up in the air because some people are staying and want to go on the Houston trip because there’s a chance that there’s a Game 6 or 7,” Rizzuto said. “Other people are canceling because they want to be here tonight and tomorrow night.”

And if that’s not enough, Rizzuto flies Friday to Los Angeles to meet 460 fans who bought a package to watch the Philadelphia Union play Los Angeles FC in the MLS Cup Final. Yeah, the same date as a potential Game 6.

“We’re in this really crazy, sports heaven, as I call it every day,” Rizzuto said.

This is the seventh time a World Series and NFL game take place on the same day, involving the same two metro areas, and first since 2011.

This isn’t 1986 — or even 2011 — when trying to decide which game to watch was a Sophie’s choice struggle for fans long before the takeover of social media, streaming services and an explosion of second screens that made viewing multiple events a snap.

Game 5 game airs nationally on Fox, and sports fans know where to find that station on their dial as 11,475,000 viewers tuned in for Game 1. The NFL game streams on Amazon’s Prime Video, but all Thursday games also air on broadcast television in their local markets. That means Eagles fans can flip to WPHL 17 and Texans fans can tune to MY20 KTXH-TV during World Series commercial breaks.

“It’s great for any city when you have a World Series and you’ve got an undefeated football team,” Astros manager Dusty Baker said. “I’m sure it’s not going to probably affect the crowd on either. They’ll probably have sellout crowds at both.”

For most viewers, the Prime Video app on televisions, phones and tablets or Amazon.com on computers will be their way to catch Jalen Hurts and Dameon Pierce. Bars, restaurants and hotels can access games through a deal with DirecTV. And any decent sports bar has more TVs than a Best Buy showroom. Working the mute button might be the tough task of the night.

But it wasn’t as easy back in the day to catch every Joe Morris touchdown for the New York Giants or Darryl Strawberry home run the New York Mets when they competed at the same time. The Mets won the World Series in 1986 the same Oct. 27, 1986 night the Giants played across the river against Washington on Monday Night Football in a decade when both events were still peak TV viewing experiences.

Al Michaels called the action on MNF on ABC and noted how the football game was “in a bit of a delay, here” as the “Mets Win!” message flashed on the Giants Stadium scoreboard. Mets fans at Shea Stadium and those watching the game on NBC went bonkers over the World Series championship. Over at the Giants game, fans caught on as, well, scoreboard watching wasn’t yet outdated sports slang.

Frank Gifford then welcomed “all you World Series viewers who are now joining us. And we have a good football game.”

Eagles coach Nick Sirianni and several Eagles stars have been fixtures at Citizens Bank Park over the Phillies’ postseason run and — who knows? — maybe the Game 5 score will be relayed to him over his headset. They might have to miss the World Series game, but many Eagles say they’ll pack Broad Street if there is a championship parade.