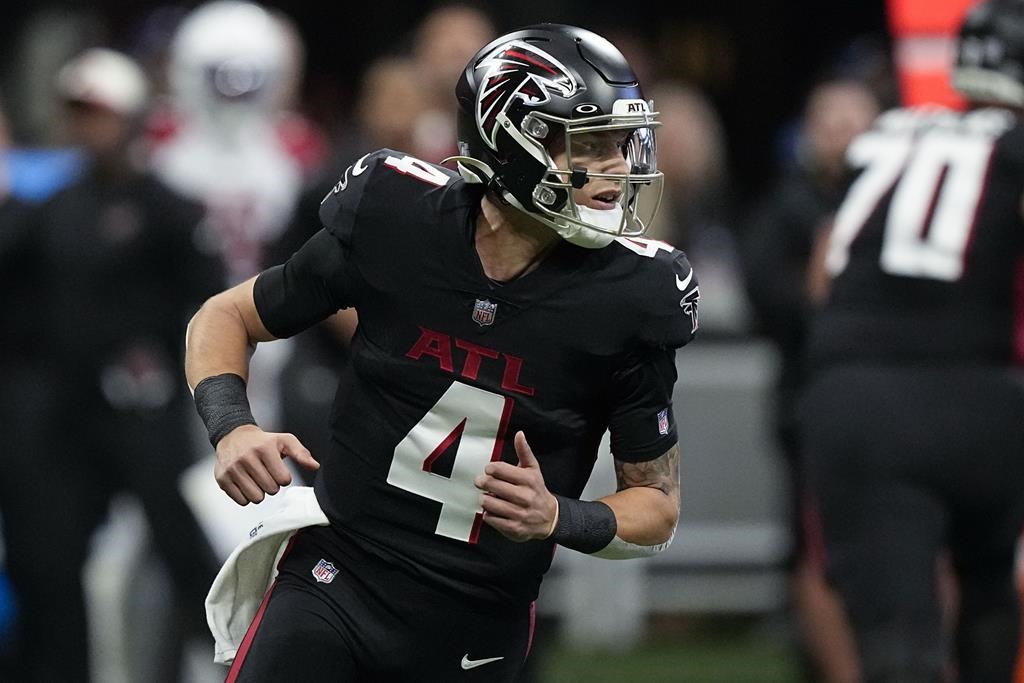 ATLANTA (AP) — Desmond Ridder may not be the Falcons’ starting quarterback for 2023, but the rookie from Cincinnati at least will head into the offseason with a win to his credit.

Neither Ridder, a third-round draft pick last year, nor the Falcons know who will start at quarterback next season. If the season ended today, Atlanta (6-10) would have the No. 7 draft pick, so it’s possible the team could select a franchise cornerstone in April.

Ridder wasn’t thinking about the future as he set about trying to drive the Falcons from their 25 into scoring position with 4:57 left in the game. He says he didn’t feel rattled.

“Just going out there, not necessarily saying you’ve been in those moments before, but just go out there, see that you’re calm, composed, and can execute things,” Ridder said. “That’s going to kind of filter off to the other guys and they’re going to want to execute more, execute better. Sometimes it’s just being calm, being poised and everyone else sees that, feels that, and goes out there and executes.”

Though the Falcons were already in Koo’s range at the 27, Ridder completed his most important pass of the day on third down — a 14-yarder to MyCole Pruitt that forced Arizona to call timeout.

“It’s just playing within the play,” Ridder said. “It was a play we ran multiple times in the game. We just went back to it and executed it in a different way.”

Coach Arthur Smith loved what he saw from Ridder, who is 1-2 as a starter since taking over for Marcus Mariota, who had played through a knee injury all season.

“We’ve been in some of these close games with a young football team in some critical spots,” Smith said. “These opportunities to grow and to execute in those moments, it was cool to see. Desmond, the third-down pass to Pruitt, the situation there, big-time play by him.”

The Falcons have been able to lean all season on a rushing attack that ranks third in the NFL at 159 yards per game. They ran for 132 yards, getting a touchdown each from Tyler Allgeier and Cordarrelle Patterson, and had a 3.9-yard average against Arizona.

A vertical passing game is still lacking, but that’s been the case all season. Ridder took some shots downfield, but not enough to keep the Cardinals guessing. He finished with a 90.1 rating after completing 19 of 26 passes for 169 yards.

Richie Grant, a second-round draft pick last year, has emerged as a threat on defense and special teams. He blocked and recovered a punt late in the second quarter to set up Patterson’s 5-yard touchdown run on the next play. Grant also ranks second on the team with 115 tackles, including 65 solo stops, and is tied for the team lead with two interceptions. He leads the defense with seven pass breakups and has three tackles for a loss.

Drake London, the eighth overall draft pick and the first receiver chosen, managed to avoid fumbling as he did the previous two weeks, so that’s a plus. But whether it’s the overall scheme or limits at quarterback, London has yet to deliver a signature moment in his first season. He leads the team with 66 catches for 746 yards and four TDs, but fans were expecting something more dynamic from London.

11 of 13 — Koo’s success rate on kicks in the fourth quarter or overtime since joining the Falcons in 2019. He was a Pro Bowl selection last year.

Work on extending the field with a downfield passing attack and get ready to host Tom Brady and NFC South champion Tampa Bay on Sunday in the season finale.