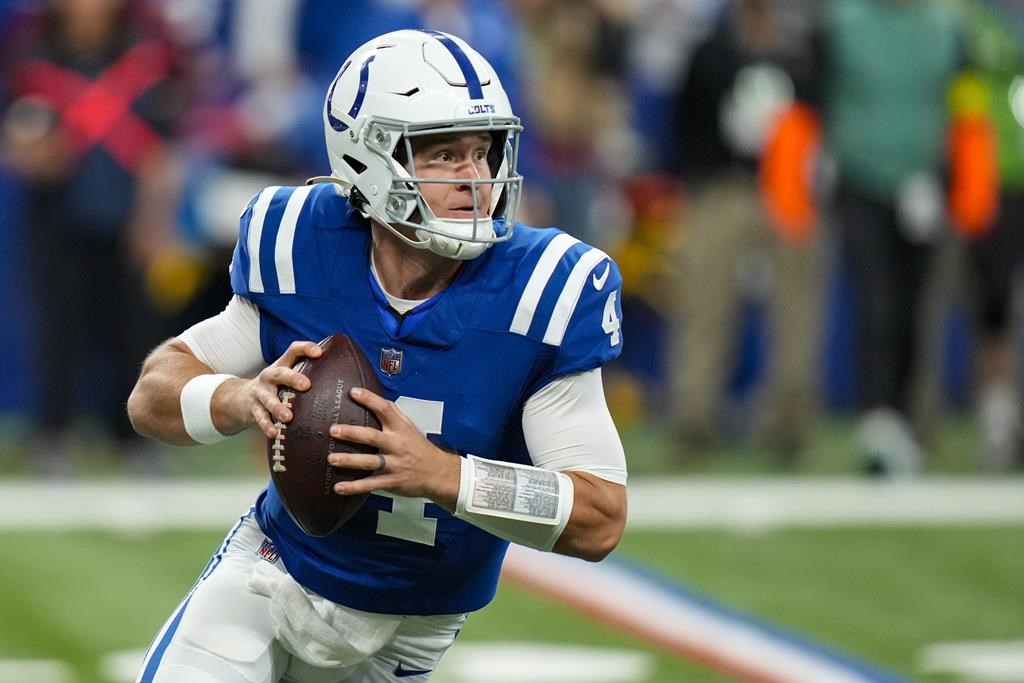 Now everyone wants to see if anything changes Sunday at New England.

“When you get off track, there is no magic pill,” Reich said Wednesday in his first public comments since the most recent moves. “As we always say, you gain your confidence and your rhythm back one play at a time.”

This has not been the kind of season anybody expected.

Indy’s ground game has struggled even with defending league rushing champion Jonathan Taylor, and the Colts (3-4-1) also have had trouble in pass protection. They’re tied for the league lead with 16 turnovers, have the NFL’s third-lowest scoring offense (16.1 points) and have not scored this season on an opening possession.

It’s befuddling and frustrating to Reich, a former quarterback whose offense worked much more efficiently in previous seasons.

Perhaps that’s why Indy has made an uncharacteristic flurry of midseason moves.

Since Reich took the Indy job, his opening day quarterback has started every game except one. The decision to demote Ryan, a longtime veteran and 2016 league MVP, in favor of Sam Ehlinger just one week after it appeared the Colts had finally righted the offense, caught many inside and outside the locker room off guard.

But it’s unclear what may change without Brady. Scott Milanovich and Parks Frazier coach the quarterbacks and the offensive line seems to be a far more troubling problem.

Plus, Reich has been calling plays since he rejoined the Colts and has no intention of giving up those duties.

At the moment, Milanovich and Frazier don’t appear to be in trouble, especially with a second-year quarterback still getting acclimated to the starting job. Reich also expressed confidence in offensive line coach Chris Strausser.

So why make the move?

“I just think looking for certain dynamics,” Reich said. “Sometimes if there is a player on a team and he’s a good player, but there’s not the right chemistry or something is not gelling the way you thought it would and that player goes to another team, and he succeeds wildly, why is that?

“They just fit better on another team and sometimes I think that happens in coaching.”

Indy also has been tinkering with its lineups.

Hines was supposed to be a key cog this season, but didn’t get enough touches to make a real impact. He had 18 carries for 36 yards and one touchdown while catching 25 passes for 188 yards before the trade after signing a three-year, $18.6 million contract in September 2021.

Reich declined to say whether Hines requested a trade.

Either way, Zack Moss, who was acquired from the Bills, was given Hines’ old jersey number (21) and locker.

“It’s always tough,” Pro Bowl center Ryan Kelly said. “You work with somebody every single day. The coaches and players, we have more of a peer relationship sometimes than we do a true coach-player relationship, so it’s tough to see anybody go. It’s the nature of the business.”

The most baffling part might be most midseason overhauls occurs when teams are out of or fading from postseason contention. But the Colts are just one game out of playoff position.

Ehlinger gave Indy a spark with his legs last week by buying time, throwing on the move and scrambling for extra yards. The former Texas star was 17 of 23 with 201 yards, no touchdowns and no interceptions in his starting debut, though he did lose one fumble.

The Colts believe that’s something they can use to their advantage the rest of this season as long as Ehlinger stays focused on football.

“There’s so much in this league that’s out of your control,” Ehlinger said. “You will exhaust yourself mentally and physically if you try to worry about all the pieces you can’t move.”