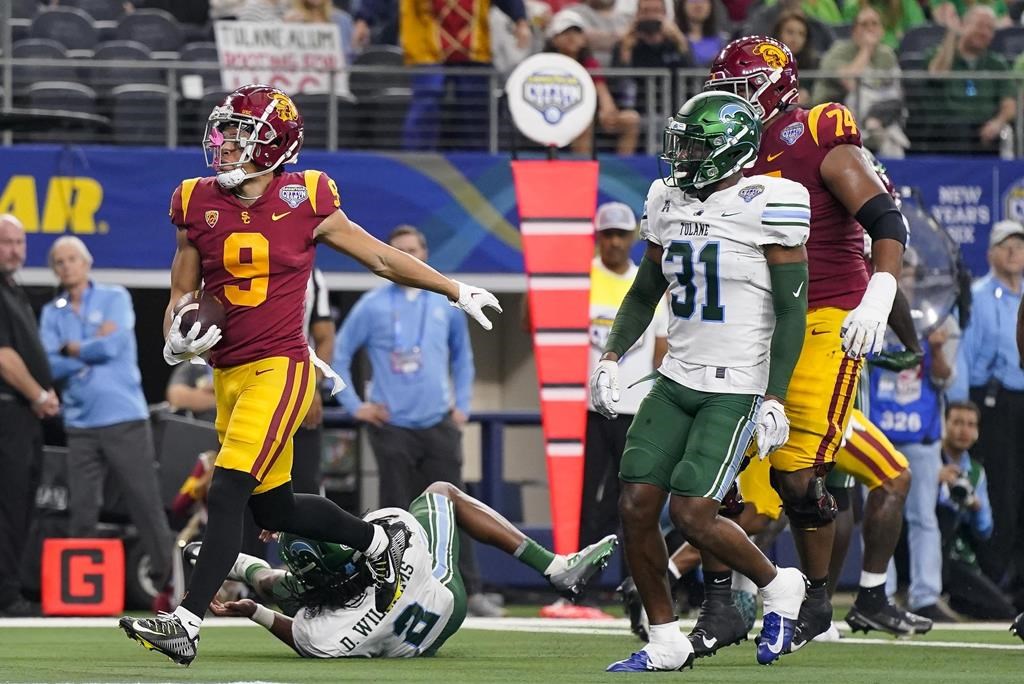 ARLINGTON, Texas (AP) — Tulane tight end Alex Bauman caught a 6-yard touchdown from Michael Pratt with 9 seconds left to cap a frantic finish by the 14th-ranked Green Wave in a 46-45 win over Heisman Trophy winner Caleb Williams and No. 8 Southern California in the Cotton Bowl on Monday.

Bauman’s contested catch, with linebacker Eric Gentry draped over him, was initially ruled an incompletion, but a replay review showed the ball never touched the ground as the players rolled over in the end zone. The Green Wave scored 16 points in the final 4:07, the game-winning touchdown coming after they got the ball back following a safety.

“I might have had a heart attack,” Tulane coach Willie Fritz said moments after the game ended.

Williams was 37-for-52 passing for 462 yards and a Cotton Bowl-record five touchdowns, exactly one month after the quarterback suffered a hamstring injury in USC’s loss to Utah in the Pac-12 championship game that kept the Trojans from making the four-team College Football Playoff.

Tyjae Spears ran for 205 yards and his career-best fourth touchdown started the final scoring surge for the American Athletic Conference champion Green Wave (12-2), who completed an FBS-record 10-win turnaround around after going 2-10 last season. They were in the New Year’s Six game as the highest-ranked Group of Five team.

After Spears’ 4-yard TD with 4:07 left, the Green Wave opted to kick deep instead of trying an onside kick. Mario Williams signaled for a fair catch, but fumbled the ball out of bounds at the 1. Two plays later, defensive tackle Patrick Jenkins met Austin Jones in the end zone and smothered him for a safety.

Pratt completed only 8 of 17 passes for 234 yards, but had two 24-yard completions on that final drive after the safety. The first one to Bauman converted a fourth-and-10, and Deuce Watts held on despite a crushing hit from a defender that left both of them on the ground after a 24-yard gain to the 6 with 18 seconds left.

After Williams followed coach Lincoln Riley from Oklahoma, the Trojans (11-3) matched the biggest turnaround in school history despite the coach’s first loss in six games at AT&T Stadium. It was a seven-win improvement over last season’s 4-8 record before Riley and Williams arrived on the West Coast.