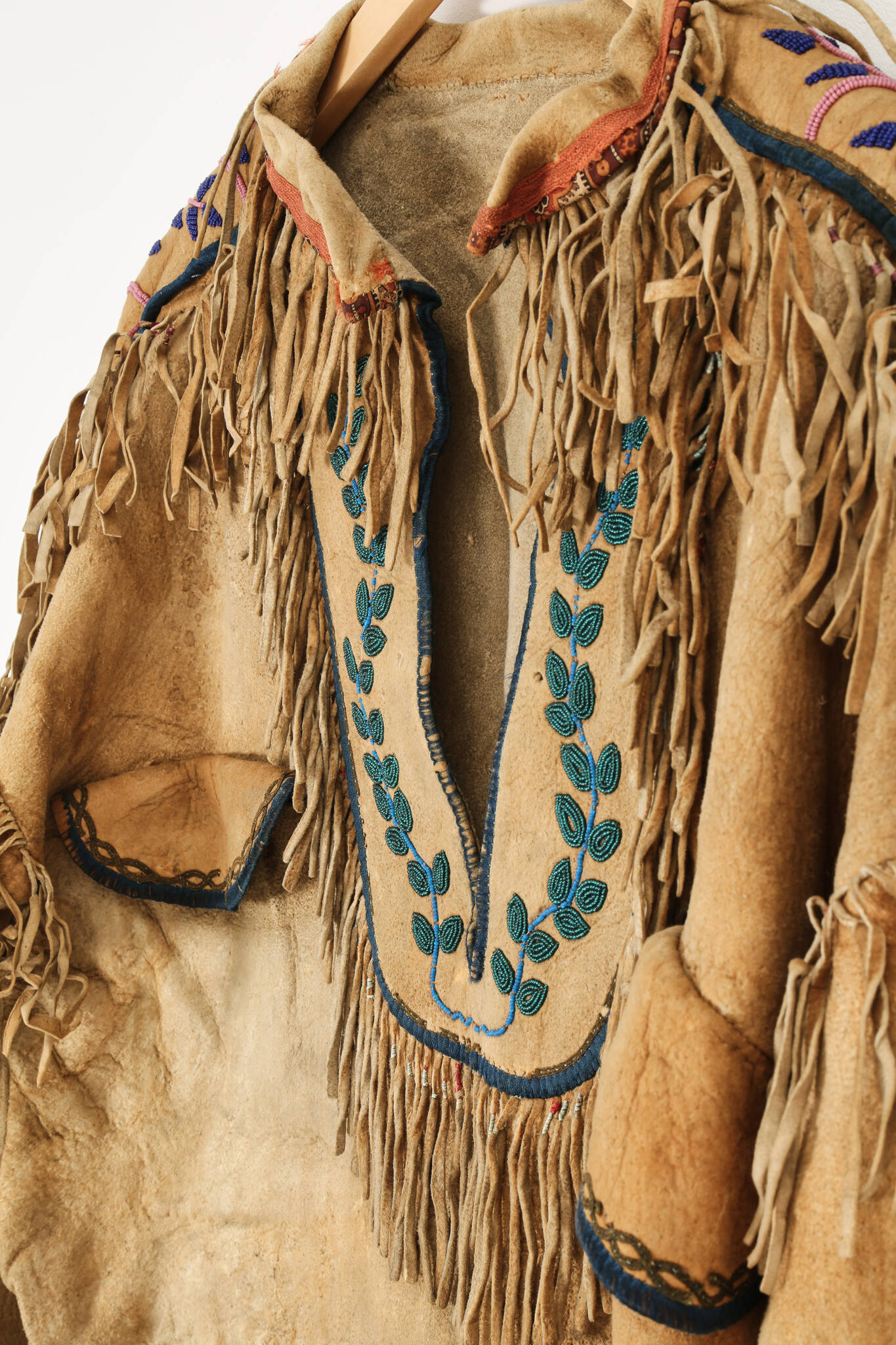 An Indigenous jacket with connections to the Red River area has travelled thousands of miles across multiple centuries to end up in the care of a vintage clothing supplier in the United Kingdom. Now, staff at the company are trying to figure out how to get it home — and where exactly home might be.

In June, a clothing appraiser at Glass Onion, one of the U.K.’s largest vintage clothing businesses, discovered the jacket as she was sifting through a bale of second-hand clothing from the United States. “She kind of spotted that jacket as being really special and really unique, so we just took it from there and held it in a safe space until we had time to look into it further,” Alice Leadbetter, head of marketing at Glass Onion, said.

Every few weeks, Glass Onion handles up to 20,000 kilograms of clothing from global textile recyclers, making it extremely difficult to track items to their source. Hoping to learn more about the jacket, Leadbetter sent pictures to its network of vintage clothing experts in the U.K. Unfortunately, the effort turned up little useful information, she said.

Undeterred, she turned to the internet, uploading a video on TikTok with a plea for viewers to reach out with information. The video went viral on the social media platform, amassing more than 500,000 views and hundreds of comments speculating on the jacket’s origins. Viewers remarked on the beadwork, embroidery style and distinct, buttonless placket, with numerous people suggesting Leadbetter connect with researchers from the Manitoba Museum. That’s what she did.

“I looked at it, and I compared it with some of the coats we have at the museum,” said Maureen Matthews, the museum’s curator of cultural anthropology. “It’s very hard to identify who might have made it, but you can certainly work out approximately.”

By looking at clues within the jacket’s design and the materials used to make it, Matthews has made some educated guesses.

The colour of the thread — a muted shade of olive — is likely the result of natural dyes, which place the jacket in the pre-1850s era, before chemical dyes were introduced. And a unique style of double-chain stitching used on the pockets potentially signifies Cree or Métis craftsmanship.

“That style of embroidery was taught to girls who attended school in Red River before Confederation,” Matthews said, adding that she believes the jacket belonged to a man and the stitching is not proof of who made it.

“Very beautiful coats like this are often given as gifts, so they travel — where they wound up might have nothing to do with where they were made,” she said.

Although the jacket has monetary value, Matthews would not comment on how much it could be worth.

“My interest is in the historical value and the extent to which this object can help teach,” she said. “It’s one of those things that help correct our view of history because most of history is based on the written words of men… but when you look at an object like that, you are reminded of the women… and the very fact that they contributed so much to society.”

The Manitoba Museum has accepted donations of similar historical items in the past, but for now, it remains in the care of Glass Onion.

Matthews feels it is in good hands.

“They deserve credit for their reaction to it… they recognized right away that this object was more than just something to wear,” she said. “That’s really commendable.”

Ultimately, Glass Onion plans to return the jacket to its rightful owners, but it is still trying to narrow the scope, Leadbetter said.

“It’s difficult to know the best way to do it, or specifically what person or people (to return it to),” she said. “For now, we are just taking good care of it. We are trying not to rush anything because, obviously, it’s a very special jacket.”

Along with the Manitoba Museum, Leadbetter has connected with dozens of other universities and researchers who have provided her with possible leads, and she plans to pursue those thoroughly before she decides where to donate the jacket, she said.

People with information can reach out to Glass Onion through its website at www.glass-onion.com, and Leadbetter will continue to provide updates on the research journey through the company’s social media profiles.