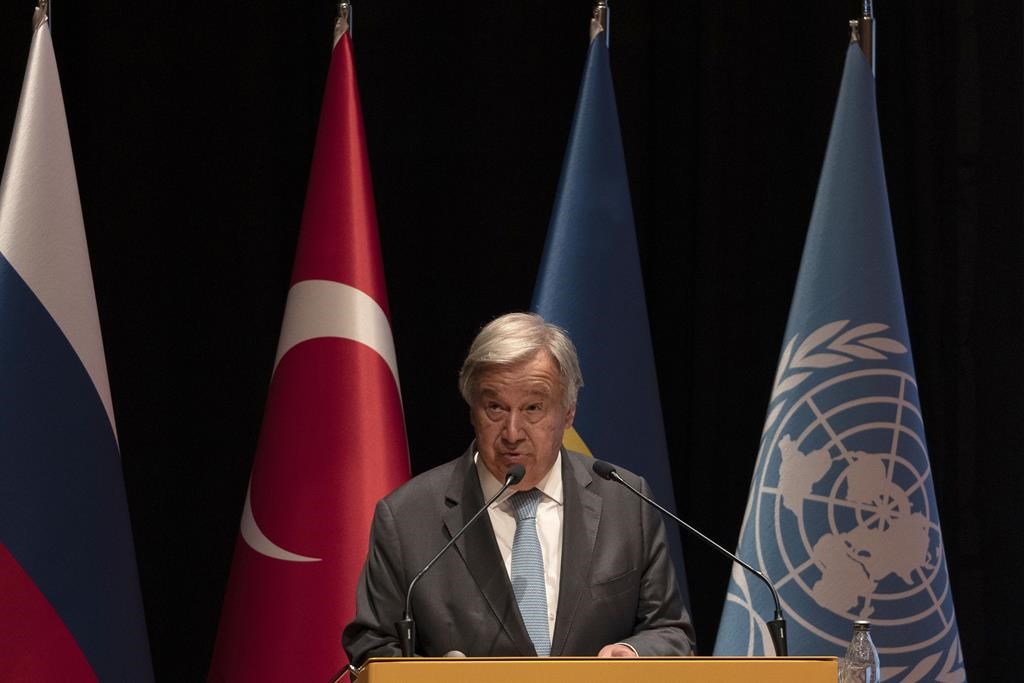 UNITED NATIONS (AP) — North Korea has increased its repression of the rights and freedoms of its people and the U.N. Security Council should consider referring the country to the International Criminal Court for possible crimes against humanity, Secretary-General Antonio Guterres said in a new report circulated Thursday.

The report to the U.N. General Assembly said there has been no progress in ensuring accountability for human rights violations in the reclusive north Asian country and cited previously documented instances that may amount to crimes against humanity.

It also noted U.N. human rights chief Michelle Bachelet’s update to the Human Rights Council in March that information her office received “continued to suggest that there were reasonable grounds to believe that crimes against humanity had been committed … and may be ongoing” in the Democratic People’s Republic of Korea, the country’s official name.

Guterres said “it remains imperative for the international community to respond to the human rights situation” in the DPRK, including supporting accountability “if crimes against humanity are found to have been committed, in order to avoid impunity.”

“This includes the Security Council acting on its own or on the recommendation of the General Assembly to consider referral of the situation to the International Criminal Court,” he said.

The ICC was established to seek accountability for the world’s worst atrocities — war crimes, crimes against humanity and genocide.

The Office of the U.N. High Commissioner for Human Rights, which Bachelet headed until Thursday when her four-year term ended, sent a note to the DPRK mission in Geneva on July 1 seeking comments on the draft report, but Guterres said it received no reply.

The 18-page report, covering the period from August 2021 to July 2022, said the further repression of human rights in the DPRK took place during COVID-19 restrictions which were subsequently increased and included lockdowns.

North Korea acknowledged its first coronavirus outbreak in May and subsequently reported about 4.8 million “fever cases” in its population of 26 million, but only identified a fraction of those as COVID-19. The country’s leader, Kim Jong Un, declared a widely disputed victory over COVID-19 on Aug. 10, but experts believe North Korea has manipulated disclosures of its outbreak to help him maintain absolute control.

Secretary-General Guterres said COVID-19 restrictions which closed the country’s borders and restricted freedom of movement and social interaction within the country, “have enabled the government to further suppress the flow of information and ideas among its people.”

These developments add to the country’s repressive political and security system “that uses surveillance, coercion, fear and punishment to suppress the will of the people, divide them, sow distrust and stifle the emergence of any collective will or authentic, home-grown culture,” he said.

The report cites the Reactionary Thought and Culture Denunciation Law enacted in 2020 which reportedly punishes anyone found to possess or distribute large amounts of media material from South Korea with life imprisonment or even the death penalty.

One man was reportedly executed in public in April 2021 after his neighborhood watch unit observed him selling USB and CD storage devices containing films, music and broadcasts from South Korea, the report said.

The law also criminalizes other acts including using slang and fonts, or typefaces, from South Korea, with penalties including job dismissal and fines, it said.

The report said North Koreans who managed to escape from the country expressed widespread fear in interviews of being sent to a political prison camp for expressing views or criticizing the government.

This remains “the most emblematic example of the gross violation of the right to freedom of expression in the country.” it said, adding that five such camps are believed to exist.

Underlying the widespread and systematic repression of human rights is a system in which the ruling Workers’ Party of Korea categorizes all people into one of three classes, based on its judgment “of their loyalty and acquiescence to its centralized rule,” the report said.

Escapees interviewed said this classification, known as songbun, affects a range of human rights including access to higher education, housing, food, employment, participation in public affairs, marriage and family life and places of residence, it said.

“Enforced disappearance to political prison camps continues to epitomize a system of governance that subdues and controls rather than represents the people,” the U.N. chief said.