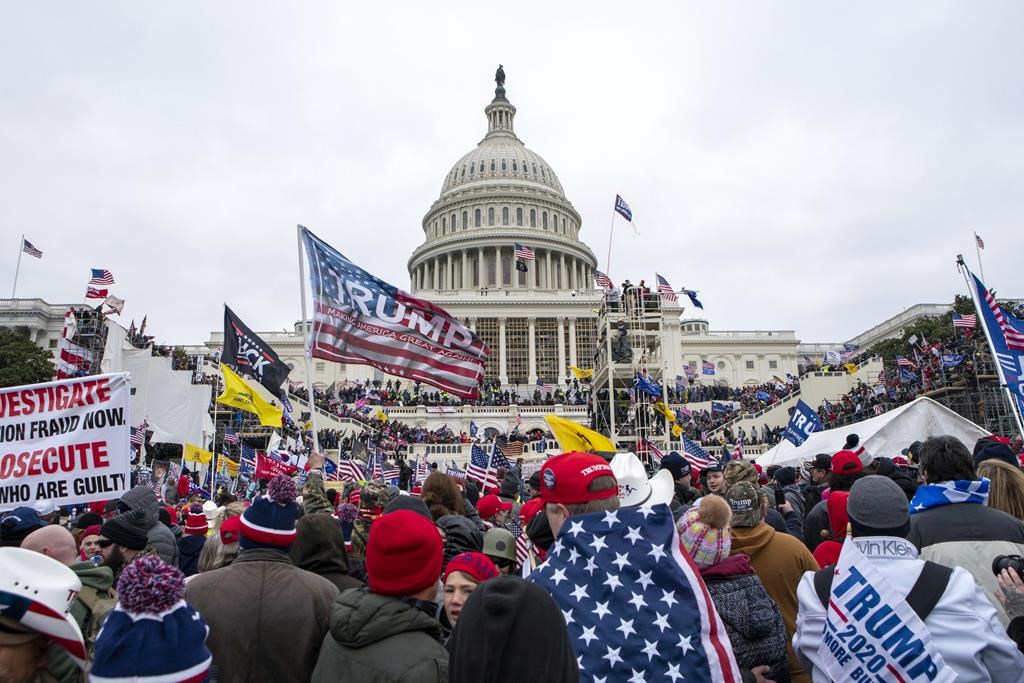 WASHINGTON (AP) — Days after the Jan. 6, 2021, insurrection, Oath Keepers founder Stewart Rhodes tried to get a message to then-President Donald Trump that urged him to fight to stay in power and “save the republic,” according to trial testimony on Wednesday.

Rhodes, who is on trial for seditious conspiracy in the U.S. Capitol attack, said in his message, sent through an intermediary, that the Oath Keepers would support the Republican president if he invoked the Insurrection Act and called them up as a militia.

The message never made it to Trump. The intermediary — a Texas software developer and military veteran who testified he had an indirect way to reach the president — was taken aback by it and went to the FBI instead.

“That’s asking for civil war on American ground … that means blood is going to be shed on streets where your families are,” Jason Alpers told jurors. He decided not to pass along Rhodes’ words. “It would have wrapped me into agreeing with that ideology in some way, which I did not.”

Jurors also heard a recording Alpers made of his meeting with Rhodes in a Dallas-area parking lot, where the Oath Keepers leaders said “we should have brought rifles,” in reference to the Capitol riot. The group did have a large stash of weapons in a hotel room in nearby Virginia, but didn’t use them that day.

Alpers testified as prosecutors wrap up their case against Rhodes and four associates in the most serious case stemming from the Jan. 6 attack to go to trial yet. Prosecutors sought to show that Rhodes continued plotting to stop the transfer of presidential power even after the Capitol riot, which delayed the certification of Democrat Joe Biden’s electoral victory.

Alpers’ connection to Trump is unclear, and he didn’t elaborate on how he could have gotten the message to him. Alpers went to the FBI a few months later with the recording of his mid-January 2021 meeting with Rhodes.

The two men had a mutual acquaintance and Alpers agreed to meet the antigovernment group leader to potentially pass along a message to Trump. He met Rhodes with a group of supporters in a parking lot of an electronics store in the Dallas area.

Alpers recorded the meeting with a thumb-drive recording device to protect himself and ensure he had an accurate depiction of the message, he said. After chatting with Alpers, Rhodes wrote down a message on Alpers’ phone for the president.

In it, Rhodes implored Trump to invoke the Insurrection Act and promised that the Oath Keepers would support him if he did.

“You must use the Insurrection Act and use the power of presidency to stop him. All us veterans will support you,” Rhodes wrote. If Trump didn’t act, Rhodes warned that Trump and his children would “die in prison.” He urged Trump to “go down in history saving the republic” and not “surrender to enemies.”

In the meeting, Rhodes also vented his frustration with the president to his new acquaintance.

“If he’s not going to do the right thing and he’s just gonna let himself be removed illegally then we should have brought rifles,” Rhodes said, according to the recording of meeting. “We should have fixed it right then and there. I’d hang (expletive) Pelosi from the lamppost,” Rhodes said, referring to Democratic House Speaker Nancy Pelosi.

Rhodes’ lawyers have said their client didn’t commit seditious conspiracy because he believed Trump was going to invoke the Insurrection Act and call up the Oath Keepers as a militia to put down what Rhodes saw as a coup by Democrats. The Insurrection Act gives presidents broad authority to call up the military and decide what shape that force will take. Trump floated invoking it at other times in his presidency but never did.

Rhodes’ lawyers have argued their client was merely lobbying a president to utilize a law.

While questioning Alpers on the stand, defense attorneys sought to portray the message as another bombastic way to call on an elected official to invoke a law. Alpers also acknowledged that he didn’t turn over the recording to the FBI immediately, saying he initially didn’t want to get involved.

Rhodes and his co-defendants are the first among hundreds of people arrested in the Capitol riot to stand trial on seditious conspiracy, a rare Civil War-era charge that calls for up to 20 years behind bars. The stakes are high for the Justice Department, which last secured such a conviction at trial nearly 30 years ago, and intends to try two more groups on the charge later this year.

On trial with Rhodes, of Granbury, Texas, are Kelly Meggs, leader of the Florida chapter of the Oath Keepers; Kenneth Harrelson, another Florida Oath Keeper; Thomas Caldwell, a retired U.S. Navy intelligence officer from Virginia, and Jessica Watkins, who led an Ohio militia group. They face several other charges in addition to seditious conspiracy.